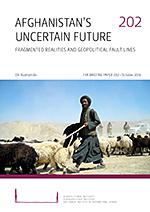 Afghanistan has failed to coalesce into a modern nation-state, but can better be characterized as a patchwork of contending ethnic factions and ever-shifting alliances contributing to a fragmented political and social reality.

Political rifts within the government are rife. There has been a lot of speculation on whether the Ghani-Abdullah administration will survive or whether it will buckle under pressure from severe internal tensions.

The security situation in Afghanistan remains extremely fluid and the insurgency shows no signs of abating. The Afghan Taliban control most of the anti-government battlespace, and fears of Daesh (Isis) establishing a formidable presence in Afghanistan are unfounded.

Afghanistan finds itself in the midst of a modern version of the historical Great Game, that is, by virtue of its geography becoming yet again a pawn in the struggles over political ideology, economic interests and commercial influence.

After nearly two decades of conflict, the top Taliban political leadership have come to an understanding that neither side can win on the battlefield and that there needs to be a political settlement to end the violence. The weak administration would need guarantees that a ceasefire would hold and a subsequent inclusive peace deal would be struck in the event of the complete withdrawal of foreign military support.