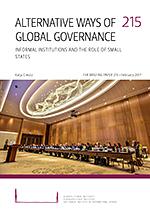 In addition to formal international organizations, alternative ways of arranging intergovernmental cooperation are proliferating. One tendency is to create looser structures around a shared purpose often without permanent secretariats. The G20 and the Arctic Council are examples of such informal intergovernmental institutions.

Informal institutions are preferred due to their supposed effectiveness, but also because of domestic politics. Most states participate in such institutions, but the United States in particular has favoured them over formal international organizations.

The increasing importance of informal institutions, especially if they seek to address global concerns, may be detrimental to small states that have traditionally relied on multilateral institutions and the rule of international law, such as the United Nations (UN).

Small states should actively engage with informal institutions instead of adopting a strategy of resistance. Small states can seek to play a part in these institutions, build coalitions to address transparency or inclusiveness concerns, or try to influence specific issues in their national interest.

A pragmatic approach to new institutional forms should not challenge the small states’ focus of attention on multilateral institutions and a rule-based international order, however. The interests of small states can be protected only by ensuring that all states may take part in global governance, based on sovereign equality.