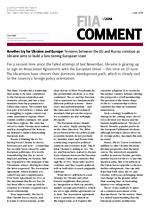 For a second time since the failed attempt of last November, Ukraine is gearing up to sign an Association Agreement with the European Union – this time on 27 June. The Ukrainians have chosen their domestic development path, which is closely tied to the country’s foreign policy orientation.