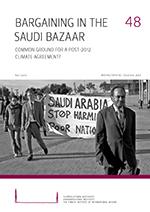 Saudi Arabia’s interests vis-à-vis international climate policy are fundamentally tied to its ownership of the world’s largest proven oil reserves and its political economy, which depends on oil revenues for stability and survival.

The ‘discrimination’ against carbon dioxide and fossil fuels is a recurring theme that reflects the country’s disapproval of any constraints on global oil consumption.

The Saudi position has evolved around four pillars: preserving oil revenues, receiving compensation for the adverse impacts of climate change mitigation, avoiding commitments, and acquiring technology and capacity for adaptation.

Saudi Arabia’s influence in the negotiations stems from a long-term strategy of obstructionism, the ultimate aim of which is to prevent an agreement from emerging.

The country’s status as a developing country is increasingly contested due to its high GDP per capita, while its calls for compensation for losses in oil revenue are strongly criticised, but Saudi Arabia still faces major development challenges, economic diversification being the most pressing.

Although Saudi Arabia’s position towards adaptation requires adjusting, there are clear points of dialogue with the West, including technology transfer and capacity building.