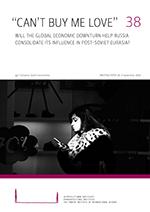 As the Kremlin believes that the global economic downturn is increasing the trend towards greater regionalism, the strategic conclusion is to strengthen Russia’s position as the centre of its “own region” – post-Soviet Eurasia.

In order to enhance its geopolitical posture in the ex-Soviet area, Russia has been pursuing a twotrack policy: it is buying up assets from, and giving out loans to, its distressed neighbours on a massive scale.

Several forces appear to be working at cross-purposes with the Kremlin’s ambitions: 1) the state of Russia’s own economic system; 2) the wiliness and cunning maneuvering of Moscow’s “allies”; and 3) the growing competition on the part of the other centres of power – the European Union and China.

Ultimately, the Kremlin’s desperate efforts to turn Russia into a geopolitical leader of the Commonwealth of Independent States (CIS) are likely to be frustrated by Russia’s lack of a coherent long-term strategy and by its socio-political system’s dearth of appeal.

Much ado about nothing: The EU's transport dialogue with Russia