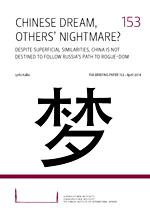 Although China’s statements about the Ukrainian crisis have been weighed very carefully, there are concerns that China is drawing lessons such as ‘might is right’ and ‘geopolitics is all that matters’ from the crisis.

The hawks in China have adopted a similar tone to that of the Kremlin, with both wishing to see a relatively diminished Western influence in the international arena.

The Chinese Dream is all about national rejuvenation, which entails redressing past grievances. Nevertheless, the Dream need not turn into a nightmare for other powers.

The increase in China’s military budget does not indicate growing ambitions of a global power projection. China’s primary concern remains stability both within and without its borders.