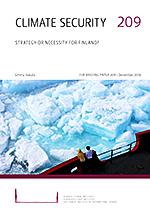 Climate change will have security effects, both directly in the form of natural disasters and indirectly through societal upheavals. In the international arena, some of these have already been recognized by political leaders.

In Finland, climate security has not emerged as a major policy issue. This may be due in part to the fact that the relatively weak ecological impacts predicted for Northern Europe do not amount to a significant sense of threat.

Yet the effects of climate change will be felt globally and will also pose indirect security threats. Therefore, Finland has a responsibility and an interest to develop its own climate security policies and participate in international cooperation in this field, with the aim of managing the phenomenon.

The securitization of climate change will not be beneficial or effective if it is only seen in terms of an imposition of traditional security practices onto climate policies. Instead, climate security discussion and policy should be based on participation and pre-emption rather than on extreme measures and emergency.

Concrete policies need to be developed to tackle climate security. Finland should contribute to this effort both at the national and the global level, focusing on areas of its own expertise such as science and technology, regional and multilateral cooperation, peace-building, or the Arctic region.

Global networks of mediation: Prospects and avenues for Finland as a peacemaker