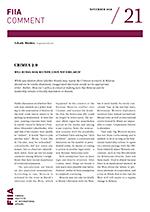 While speculation about whether Russia may repeat the Crimean scenario in Belarus should not be totally dismissed, exaggerated alarmism would not be appropriate either. Rather, Moscow’s policy is aimed at making sure that Belarus and its leadership remain critically dependent on Russia.

A geopolitical game changer : the Ukraine crisis has strengthened Western resolve and left Russia in a vulnerable position