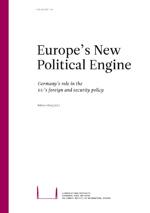 At the beginning of this decade, the EU’s foreign and security policy was leaderless, while several crises put Europe under pressure. The economically strong Germany had to become Europe’s new political engine. The way in which Germany took up its new and unusual role and the implications that German leadership has for the EU’s foreign and security policy are analysed in this report.

Germany fulfilled the leadership role that it never applied for. It pushed for a diplomatic solution to the conflict in eastern Ukraine and led the Russia sanctions policy of the West. Germany not only followed the French call for military assistance after the Paris attacks, but is also heavily engaged in diplomatic efforts to solve the Syrian conflict. Berlin is central to the development of broader EU policies, such as the European Neighbourhood Policy and the Common Security and Defence Policy. It is in the driver’s seat when it comes to relationships with key international actors, such as Russia, Turkey and the US.

Germany has become an unlikely and unusual foreign policy leader, which still differs in various aspects from traditional foreign policy powerhouses. It leads through institutions and diplomacy rather than military power. It seeks European solutions rather than national ones. However, the success and sustainability of Germany’s approach depends on securing Europe’s unity and resilience in the face of crises in the neighbourhood and the effects of globalization.

The German Election: No vote for Europe?