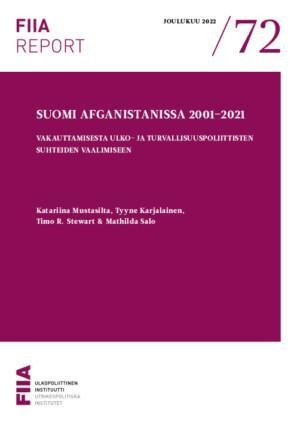 Finland participated in the international stabilization and reconstruction efforts in Afghanistan for nearly 20 years, contributing around 2,500 soldiers and 140 civilian crisis management experts. During this period, Finland’s development cooperation funds and humanitarian assistance allocated to Afghanistan amounted to around EUR 398 million.

When Finland made the decision to join the operations in Afghanistan at the turn of 2001 and 2002, the country was living in uncertain yet optimistic times. The Taliban regime had collapsed quickly after the US-led military intervention, and the international community was broadly committed to supporting the interim administration in changing the country’s course. Finland sent a CIMIC unit to Afghanistan to participate in the International Security Assistance Force (ISAF) and support the stabilization and reconstruction efforts. It also began to channel development cooperation funds to Afghanistan, notably through UN and World Bank programmes, and soon allocated most of its civilian crisis management resources to the European Union Police Mission (EUPOL) in Afghanistan.

In the second half of the 2000s, however, Afghanistan slid further into a devastating civil war. A decade into the international intervention, the early optimism had given way to Afghans’ growing distrust of their government and the international actors. The Finnish troops, now comprising around 200 soldiers, repeatedly engaged in combat as part of the military operation that was now led by NATO and had become a party in the conflict. While the security arrangements for the international actors required increasing resources, their room for manoeuvre became significantly more limited.

After the ISAF mission ended, Finland continued to participate in the NATO-led Resolute Support Mission (RSM), which supported the Afghan security forces until the summer of 2021. Finland also remained one of the most important actors to support EUPOL until the end of the mission and took responsibility for co-hosting the 2020 Afghanistan pledging conference to support the country. Afghanistan was the biggest recipient of Finland’s development cooperation funds throughout the second half of the 2010s. In August 2021, Finland suspended its extensive activities in Afghanistan in chaotic circumstances as the international community left the country following the US decision to withdraw its forces and the Taliban’s seize of power.

This research examines Finland’s activities in Afghanistan by focusing on why Finland decided to engage in Afghanistan, on what its activities were based, and what can be learned from them for future crises and conflicts. The research is based on the analysis of a broad set of qualitative data consisting of interviews with 64 people who were involved in the intervention in Afghanistan or employed in related activities. Workshop discussions were also held to hear the views of the Afghan diaspora in Finland and experts. In addition, the researchers analysed public documents and previous research literature and held background discussions with experts. This research report broadly examines the consequences of Finland’s objectives, the logic behind its activities and the key challenges from the perspectives of military crisis management, civilian crisis management, and development cooperation and humanitarian assistance.

Our research findings suggest that Finland’s activities in Afghanistan were motivated by multiple objectives that were partly unclear and at times conflicting. Based on government reports and other public documents, Finland’s primary aim was to stabilize and support Afghanistan to enhance international peace and security. The proclaimed objectives highlighted Finland’s responsibility as part of the UN-led international community and its efforts to support the development of good governance and the rule of law and promote the rights of women and girls in particular. In our research, these objectives comprise a framework we call “Finland as a benefactor”.

On the other hand, our analysis suggests that alongside – and over – these proclaimed objectives, Finland’s participation was primarily guided by its desire to maintain and strengthen its foreign and security policy relations with the US and other international partners, as well as its effort to deepen its collaboration with NATO. Within the limits of this “Finland as a partner” framework, Finland sought to position itself as a reliable benefactor but also to gain advantage by improving its national capacities.

Finland’s multiple objectives in Afghanistan might not necessarily have posed a problem in terms of the appropriateness of Finland’s involvement. Indeed, at the beginning they worked in harmony as the operating environment allowed Finland to show solidarity with the US and support it in the fight against terrorism while also appearing as a humanitarian actor that promoted stability and development in Afghanistan.

However, tensions emerged between the different rationales when the situation in Afghanistan deteriorated, and the nature and outcomes of the intervention became more conflicted. In the absence of clearly and transparently set objectives, it was challenging to build an action plan and assess the activities. One particular factor that made the planning and monitoring of Finland’s participation difficult was the effort to disguise the fact that it was motivated by a desire to foster transatlantic relations and partnerships. From the perspective of the international partnerships, it was enough that Finland participated in the intervention. In terms of Afghanistan and its development, the objectives of the various activities remained vague, unrealistic and unclear, and they received insufficient attention. Instead of critical analysis and strategic monitoring, both international and Finnish actors attempted to meet the stated objectives by highlighting the progress made in Afghanistan and keeping silent about the combats and difficulties.

It is almost impossible to assess to what extent Finland achieved its objectives in Afghanistan, because no clear and transparent objectives had been set. Based on our interviews, Finland’s involvement benefitted its transatlantic relations, Nordic cooperation and position in the international community. Besides defence cooperation, Finland developed its national capacities and raised its profile within the EU’s civilian crisis management framework. It is however difficult to assess in retrospect how the different forms of participation deepened Finland’s relations with the US, for example, and whether Finland’s activities were cost-efficient in terms of its partnership goals and national capacities, because no expectations had been explicitly stated.

While temporary successes were achieved in improving security and the conditions for education in some areas, for example, issues such as a lack of understanding of the context of the conflict, challenges related to local ownership and the absence of a coherent long-term strategy became stumbling blocks in the international intervention in Afghanistan. Previous research has already called attention to the negative impacts of the intervention: the civilian victims of the military operations, the changes in local power structures, the displacement of local activities and increased corruption are only some of the examples of the impacts for which Finland has also been partly responsible.

During, and partly as a result of, the intervention in Afghanistan, Finland’s policy came to be underpinned by a comprehensive crisis management strategy. In Afghanistan, this meant that Finland participated in multiple sectors and placed emphasis on the interdependence between the development and civilian crisis management efforts and military crisis management. Overall, our interviewees assessed that the activities of Finland and Finnish actors in Afghanistan were of high quality and appreciated. Our research suggests that the comprehensive strategy adopted by Finland served to justify its participation in different areas of the intervention and especially its military participation. However, Finland failed to fulfil the strategy in terms of coordinating its various activities in Afghanistan.

Finland’s experiences in Afghanistan provide lessons learned that can be used to guide its activities in future crisis and conflict situations. First, it is necessary to set clearer and more transparent objectives to enable the effective planning and strategic monitoring of activities. In the context of partnership and capacity goals, clear objectives would help to develop the resourcing and targeting of activities. As regards supporting peace and stability, clearer, context-specific objectives would make it possible to monitor the appropriateness and comprehensiveness of activities.

However, adopting a comprehensive approach does not mean that Finland should engage in all activities or areas of assistance in the target country; rather, its activities should be targeted to support the overall international aid effort. It is also important to develop Finland’s advocacy and impact efforts in multilateral interventions, in particular in situations in which Finland contributes significant resources. While Finland is in principle a small player, playing an active role in issues such as drawing attention to the possible negative impacts of interventions is consistent with its value-based foreign policy. By collaborating with like-minded actors, Finland has the opportunity to promote its interests through interventions (as far as these interests have been identified).

However, sufficient resources are required for effective outcomes: development cooperation funds and inputs from seconded experts will be wasted if the human resources allocated to the comprehensive planning, implementation and monitoring of Finland’s participation are insufficient. The setting and implementation of realistic objectives appropriate to the context require a continuously updated conflict analysis, which in the case of small players such as Finland must also include an analysis of the context of international aid and operations. After interventions, it is also important to effectively put to use the expertise of the people who return to Finland after working in crisis areas so as not to waste the cultural and linguistic knowledge they have acquired.

The lessons identified in this research are also relevant for the future of Afghanistan and Afghan people. The international community, including Finland, has been involved in shaping the structures of Afghan society, as well as its conflict dynamics, for nearly 20 years. This means that it also continues to assume its responsibility after withdrawing from the country – all the more so because the decisions to start and terminate the intervention were primarily driven by interests other than those of Afghans themselves.

In terms of Finland’s credibility as a foreign policy actor, it is particularly important that it continues to abide by its long-standing commitment to promote the rights of women and girls. In the present difficult circumstances, the cooperation and assistance efforts should be based on placing the needs and priorities of Afghans at the centre. This can be achieved by conducting a careful conflict analysis, listening to and discussing with Afghans, and promoting a strategically coordinated approach to setting the objectives and framework conditions of the cooperation at the level of the international community.

One year into Taliban rule: Will the isolation of Afghanistan continue?

Afghanistan and the rise of the Islamic Emirate: A tragic inevitability