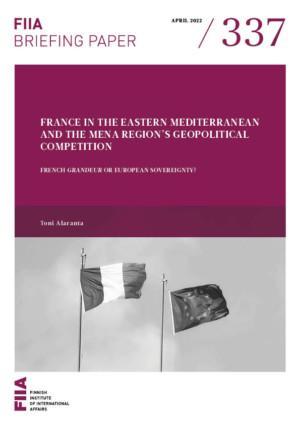 The global rivalry between the US and China, as well as geopolitical competition and instability in the EU’s southern neighbourhood, are perceived by France as urgent matters requiring stronger EU foreign policy, conceptualized as European sovereignty.

The French foreign policy elite are still largely committed to the idea of France’s exceptional role in the world, and to the extent that the EU as a whole fails to live up to the tasks presumed by France, continue their attempts at forging coalitions of the willing.

France has in recent years built a web of strategic partnerships, for example with Greece, the Republic of Cyprus, the United Arab Emirates, and Egypt, through which it aims to govern the instability in the EU’s southern neighbourhood. The aim is also to deter regional adversaries such as Turkey, a strategy that needs to be re-evaluated due to the Russian invasion of Ukraine.

France often equates its national interests with those of the EU. While this can be seen to enhance European sovereignty, it also risks increasing the perception that the EU would be a participant in various Middle Eastern conflicts. This undermines the EU’s ability to function as an objective broker and anchor of norms.