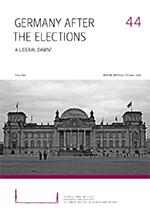 The German elections provided a clear mandate for current Chancellor Angela Merkel to form a new coalition government between her Christian Democrats (CDU) and the Liberals (FDP), led by Guido Westerwelle. Coalition talks between the two parties have started and are likely to be concluded by early November.

The big winners of the elections have been the Liberals (+4.8%), as well as Germany’s two other mid-sized parties, the Greens (+2.6%) and die Linke (+3.2%). The biggest loser of the elections were the Social Democrats (SPD) (-11.2%), who return to opposition after 11 years in government. Despite Angela Merkel’s popularity, the electoral standing of the CDU has also deteriorated (-1.4%).

Overall, the elections represent a clear shift in the political spectrum from left to right. They also indicate a further weakening of Germany’s two “catch-all” parties, CDU and SPD, and will lead to a more fluid and less predictable party system.

As the clear winners the Liberals are in a strong position to shape the agenda of the new government, especially when it comes to tax cuts and structural reforms. But it would be wrong to see the elections as a vote in favour of radical change. Rather, they were a vote against the unpopular grand coalition government.

As a result, some friction between FDP and CDU might be unavoidable. In the short-run the domestic agenda will also be constrained by next year’s elections in North-Rhine Westphalia; important because of their impact on the government’s majority in the Bundesrat, Germany’s upper chamber.

At home, the new government will face a difficult trade-off between the campaign promises of windfall tax cuts and the pressing need of budget consolidation. Differences also remain over health care reforms and labour market policies, while there is a consensus on extending nuclear energy and corporate tax reforms.

Abroad, there will be few changes as Angela Merkel will dominate her inexperienced new foreign minister on all important foreign policy issues. As before, Germany will seek close ties with the US, but will only reluctantly grow into the role of a more “normal” international actor. In the EU, the new government will seek to play a constructive role, but is unlikely to be the source of new ideas and initiatives.