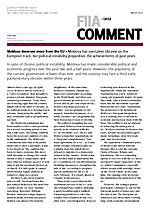 In spite of chronic political instability, Moldova has made considerable political and economic progress over the past two and a half years. However, the popularity of the current government is lower than ever, and the country may face a third early parliamentary election within three years.