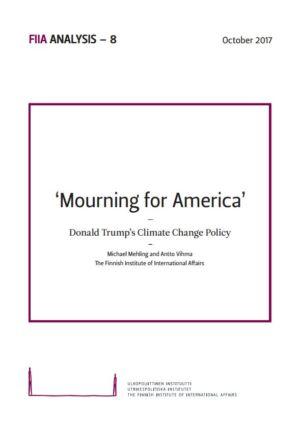 Donald Trump projects slogans more than strategy, yet his administration has moved quickly and with vigour to dismantle existing climate policies in the United States. As this analysis underlines, a robust system of political checks and balances will constrain the domestic deregulatory agenda, although Trump’s actions may disturb the delicate balance of interests in international climate negotiations. A long view on the legal and political system of the United States – from the ideological foundations of American political reaction to the federal constitution and its Madisonian separation of powers – is necessary to understand whether the policy direction charted by the current administration can prevail.

At first glance, the scale of regulatory roll-back appears unprecedented. Procedural and judicial limitations on federal powers that long predate awareness of climate change may nonetheless afford existing climate action surprising resilience against deconstruction. Still, the cumulative effects of deregulation, budget cuts, and personnel choices will eventually impact the scale and speed of US decarbonization.

At the diplomatic level, severely diminished contributions to international climate finance will impact the political dynamic in international climate negotiations, while a disengaged US is likely to have an unsettling effect on the stocktaking and periodic review processes under the Paris Agreement. Some of these effects can be compensated by market forces and invigorated action by cities and states. Meanwhile, the underlying politics in the US remain as partisan as ever. Even if contemporary policy decisions prove to be temporary outliers, a sobering insight from this analysis is that science denialism and political opportunism will surface time and again in the US public debate on climate change.

The shale gas boom: The global implications of the rise of unconventional fossil energy