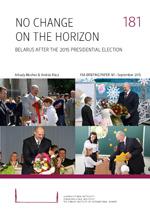 Incumbent President Alexander Lukashenko is very likely to win the presidential elections in Belarus on 11 October 2015. The opposition is unable and – perhaps, therefore – unwilling to challenge Lukashenko, while a decisive majority of the population supports the president. Meanwhile, the regime and the opposition share an interest in protecting Belarusian statehood from Russia. At present, the key actor in performing this mission is the president, who has been ruling the country since 1994. Also for this reason, there will be no Belarusian version of Maidan in Minsk.

However, Lukashenko’s foreseeable victory is not going to stop the process of Belarus gradually conceding key elements of its sovereignty to Russia. The regime is not economically sustainable without constant and massive support from Russia. In exchange for this support, Russia has been slowly but steadily strengthening its control over the foreign policy, defence sector and economics of Belarus.

The EU has neither the readiness nor the resources to confront Russia over Belarus, let alone to substitute the former in supporting Lukashenko, whereas, as stated, a regime change is not to be expected. What is more, even though the Belarusian leadership is undoubtedly concerned about the increasing assertiveness of Russia, it would be a mistake to count on significant policy shifts in Minsk – simply because Belarus is structurally hardly able to conduct any.

Softening the EU approach towards the issue of political democracy and human rights in Belarus in anticipation of certain geopolitical gains would only compromise the credibility of the EU’s policy as a value-based entity, and not generate any positive change on the ground. Instead, EU engagement with Minsk could focus on issues of trade, the promotion of economic reforms and on education, in order to prepare for the post-Lukashenko – and also for the post-Putin – era.