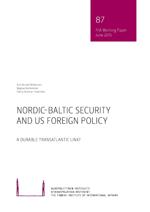 Over the more than two decades that separate the end of the Cold War from the Ukraine crisis, a security link of considerable importance has developed between the United States and the Nordic-Baltic region. The dynamics of the partnerships maintained by the Nordic and Baltic states with the US as well as, more broadly, NATO, have attracted increased international scrutiny since 2014.

A number of factors could potentially place US-Nordic-Baltic security cooperation under stress.

Firstly, while the US is not abandoning Europe; the US “rebalance” to a rising Asia, disillusionment with European defence expenditure cuts and the effects of changing domestic demographic shifts on US foreign policy mean that Europe should not expect the same type of US security presence that it enjoyed during the Cold War. The transatlantic partnership will face a number of uncertainties should Europe not assume a greater share of the collective security burden.

Questions surrounding the defence of various Baltic Sea islands and orchestrated destabilization using Russian-speaking minorities have the potential to impact regional and transatlantic security relations, including bilateral and multilateral security assistance, for example, in the form of NATO’s article five.