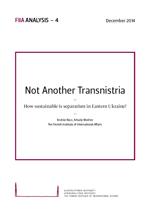 The situation in Eastern Ukraine is often compared with that of Transnistria, the separatist region of Moldova. However, the two cases differ for a number of reasons, all of which will make the “Novorossiya” project much harder for Russia to sustain than Transnistria.

First and foremost, unlike Transnistria, the Donetsk and Luhansk People’s Republics in their current shape will be unable to influence the everyday political and economic functioning of Ukraine. Vis-à-vis the rest of Ukraine, they are much smaller than Transnistria is in relation to Moldova. The main energy pipelines leading to Ukraine do not cross the separatist territories, and with the economic ties getting severed, the main instrumental function of a frozen conflict – namely to constantly influence and destabilize the target country – is likely to be lost.

There are also several other factors, including: the lack of ethnic, national, linguistic or cultural background that would provide identity foundations for the Novorossiya project; the reliance of the separatists on the continuous, massive presence of the Russian military; the damage already inflicted on Russia’s international reputation; the effect on Russian domestic politics; the need for considerable financial assistance from Russia to the separatist territories; and the risk of increasing soft security challenges directly affecting Russia.

In addition to all this, it cannot be guaranteed that the separatist elites will always be fully obedient to the will of Moscow. The a priori readiness to defend and support the action of the local authorities will limit Moscow’s room for maneouvre.

Costly both politically and economically, the Novorossiya project is able to serve the Russian strategic objectives vis-à-vis the rest of Ukraine much less than Transnistria was able to do so vis-à-vis Moldova. Hence, one probable scenario is a further escalation of hostilities to expand the separatist-controlled territory, which may unfold relatively soon. However, in the medium term, the gradual restoration of Ukraine’s constitutional order in the territory should also be considered possible, within the framework of a larger international compromise and provided that reforms progress in Ukraine.

Understanding Russia's actions in Ukraine: The art of improvisation