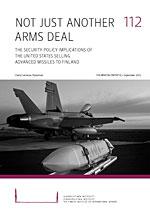 Finland’s missile deal with the US has significant political implications

Finland’s decision to acquire advanced semi-stealthy Joint Air-to-Surface Standoff Missiles (JASSM) from the United States is much more than an arms deal – it has significant political and regional military implications.

In the web of multilateral, multinational and bilateral relationships that Finland is weaving to enhance its security, the US relationship is a key cable.

The JASSM acquisition significantly changes Finland’s ability to disrupt enemy activities, both within Finland and beyond its borders. Despite being a conventional weapon, it will serve as a deterrent.

Finnish decision-makers have a responsibility to understand both the implications of the new capabilities, and to ensure that the continued development of the Finnish Defence Forces is not inhibited due to misunderstandings of what a modern defence requires and consists of.