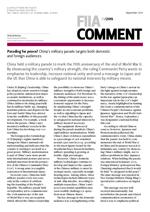 China held a military parade to mark the 70th anniversary of the end of World War II. By showcasing the country’s military strength, the ruling Communist Party wants to emphasise its leadership, increase national unity and send a message to Japan and the US that China is able to safeguard its national interests by military means.