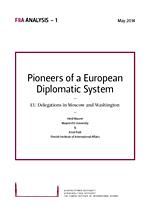 Since December 2009, the European Union has been represented abroad by more than 130 delegations, which are an integral part of the new European External Action Service (EEAS). This paper explores the performance and potential of the delegations in contributing to a common EU foreign policy.

The delegations have to strike the right balance between performing the functions of traditional diplomatic missions, while also representing the EU as a political entity that is more than an international organization, but less than a state. The delegations act as a bridge between nascent EU diplomacy and the national diplomacies of the member states. They are also microcosms that gather together under one roof different elements of the EU’s external relations, ranging from the Common Foreign and Security Policy to trade and aid, energy and migration.

The delegations have been rather successful in their three main tasks: representing the Union towards third countries, coordinating and providing services to the member states, and contributing to EU policy-making. This paper focuses on two key locations, Moscow and Washington, where the delegations are becoming visible diplomatic actors providing added value to member states as well as EU institutions. The authors argue that, following on from an early albeit cautious success, the delegations should take a stronger role in providing input into EU policy-making, promoting European interests abroad, and advancing consensus among member states’ representatives in the field. The EEAS headquarters should build a stronger link to the delegations, through more active political steering and by endeavouring to make more systematic use of the work on the ground.