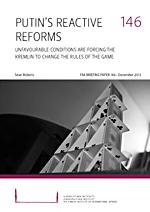 However, a number of puzzles remain, not least the intentions of the Putin administration. Alongside liberalising reforms, such as the return of direct elections for regional governors and the easing of party registration requirements, we see new restrictions that close the political field.

Nonetheless, the events of the past 20 months do reveal a distinct change in the reform process, as the Putin administration reluctantly adjusts to unfavourable political and economic conditions. In Putin’s first two presidential terms, 2000-2008, reform was ‘progressive’, aimed at extending the Kremlin’s power and authority. The latest changes, in contrast, are ‘reactive’ and involve an inevitable loss of control over political processes.

One immediate implication is that political processes will become less predictable, as the Kremlin tries to reorganise its system of governance. But, in the longer-term there is a danger that the use of political reform as a substitute for democratic change will undermine the legitimacy of the entire political system.