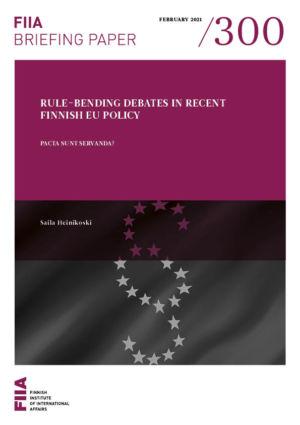 The Finnish EU policy line has traditionally been adaptable and compromise-seeking, but recent examples related to the rule-bending of EU law reveal some new tendencies.

Finland has stood out from the European mainstream in several cases that relate to the rule-bending of EU law in three different ways: rule-bending by others, collective rule-bending, and its own rule-bending.

First, intervening in rule-bending by others has found support in Finnish EU policy. Finland prioritized the rule of law in its 2019 Council presidency, as well as in the Government Report on EU policy published on 28 January 2021.

Second, alleged collective rule-bending seems to be linked to the threat of federalism. In negotiations on the recovery and resilience facility in 2020, there was a wide domestic debate on whether the result was consistent with the traditional interpretation of EU treaties.

Third, Finland’s own rule-bending of the Schengen Border Code’s six-month limit for internal border controls during the Covid-19 crisis seems to have been quietly accepted, with the Interior Minister acknowledging the existence of an “illegal state of affairs”.

Covid-19 bends the rules on internal border controls: Yet another crisis undermining the Schengen acquis?