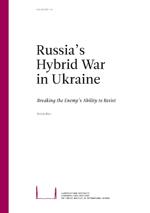 Since the change of power in Ukraine in February 2014, Russia has been swift to occupy and annex the Crimean peninsula. In April 2014, separatist riots broke out in Eastern Ukraine, following a very similar pattern to those in Crimea. These actions were accompanied by a strong and intensive, well-coordinated diplomatic, economic and media campaign both in Ukraine and abroad, also supported by pressure exerted by the large Russian military units lined up along the border with Ukraine.

The form of warfare Russia employed in Ukraine in 2014, often called hybrid war, has been aimed at defeating the target country by breaking its ability to resist without actually launching a full-scale military attack. In line with contemporary Russian military thinking on ‘new generation warfare’, hybrid war is built on the combined use of military and non-military means, employing basically the whole spectrum of a state’s policy inventory, including diplomatic, economic, political, social, information and also military means.

This report aims to seek answers to two main research questions. First, what are the main features and characteristics of Russia’s hybrid warfare as conducted in Ukraine? Derived from the first, the second research question is focused on the operational prerequisites for the Russian hybrid war. In other words, is the Russian hybrid war a universal warfare method deployable anywhere, or is it more country or region-specific?

Making sense of the Russian bear metaphor: The image of a threatened bear distracts us from understanding Russia’s actions