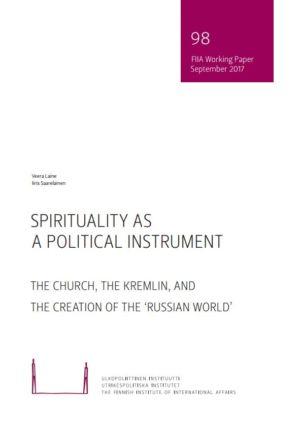 This Working Paper analyses the way in which the Russian state and the Russian Orthodox Church use the claims related to spirituality in their public diplomacy in domestic and foreign policy matters. A key impetus for the study has been the “conservative turn” in Russian politics since 2012, when the state leadership placed traditional, spiritual-moral values at the core of the political discourse and thus paved the way for the Russian Orthodox Church to become an even more influential actor in politics.

The “Russian World” concept has been an important keyword both for representatives of the Kremlin and the Church alike in recent years. The emphasis on conservative values functions as a partial support basis for the current state leadership, which benefits from the high level of trust that the Church enjoys as an institution. In domestic politics, the Church has used formal institutions for promoting legislative changes which aim, for example, at condemning offending religious people’s feelings and decreasing punishments for domestic violence.

In the foreign policy context, the actors support each other in representing the distinctive Russian values that contradict the “Western” ones – a move that can be seen as a securitization process. The “Russian World” concept functions as a geopolitical metaphor that resembles the concept of Holy Rus, reinforcing the idea of spiritual connections between all Russians, not only within the borders of today’s Russian Federation. In Ukraine, which both the Kremlin and the Church consider to be a part of the Russian World, the Church has been compelled to consider the division of Ukrainian Orthodox Churches and possible losses for the Moscow Patriarchate. In Syria, the Church has expressed strong support for the Kremlin’s actions.

The interests of Church and state are not always fully congruent. The Church is not merely the Kremlin’s puppet; it functions as its own, sometimes internally divided entity. Thus far, it seems that both the Kremlin and the Church have benefitted from their cooperation. The Working Paper concludes that by consolidating spiritual values as being reminiscent of a state ideology, the Russian Orthodox Church and the state leadership have made it increasingly difficult to change the course of the “conservative turn” in the future. The “spiritual” legacy of Putin’s era will have a long-lasting influence on Russian politics.

Russia and its neighbours: Warring histories and historical responsibility