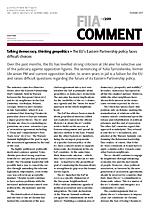 Over the past months, the EU has levelled strong criticism at Ukraine for selective use of the judiciary against opposition figures. The sentencing of Yulia Tymoshenko, former Ukrainian PM and current opposition leader, to seven years in jail is a failure for the EU and raises difficult questions regarding the future of its Eastern Partnership policy.