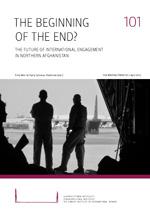 States which contribute to various international efforts in Afghanistan will find it increasingly difficult to balance a need to show long-term commitment with an unpredictable political and quickly changing operating environment.

Recent events in Afghanistan are threatening to undermine the plans for an orderly transition of security responsibilities to Afghan authorities by the end of 2014. Countries must be ready to adjust contributions in both size and task during both 2012 and 2013.

Germany has pledged to only gradually withdraw its forces and maintain its focus on partnering and training, despite an increasingly unstable environment. Current planning also foresees a German commitment in the post-2014 period.

Finland will increasingly focus on civilian crisis management efforts and development assistance, and will stay engaged and committed as long as its closest partners also do so.

Sweden is set to continue leading a Provincial Reconstruction Team (PRT), but post-2014 commitments are unclear.

The United States is set to return to ‘pre-surge’ force levels (though with a different force structure) of around 68,000 soldiers by autumn 2012. Further withdrawals of up to 30,000 soldiers are being discussed.