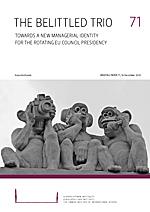 The presidency of the Council of the European Union rotates every six months among the 27 member states. Presidencies are divided into groups of three called ‘trios’, with a common programme for 18 months. This form of tripartite leadership is formalized by the Treaty of Lisbon, and member states are explicitly encouraged to share their responsibilities to a greater degree than before.

The Council presidency no longer represents the EU externally due to the prerogatives of the European Commission and the High Representative. Nor does it have any special role to play when general political guidelines are determined at the highest political level, since the European Council has become a formal institution with its own permanent presidency.

Under the new regime, the Council presidency is tasked with ensuring that the decision-making process in the Council runs smoothly. It has a limited but clear mandate to manage the Council and link this legislative body with other EU institutions. As the Council moves closer towards resembling the second chamber of the Union’s emerging bicameral parliament, the presidency in office is required to offer more procedural expertise and less political leadership skills.

The Council presidency still presides over nine out of ten Council configurations, which cover most policies from institutional and budgetary affairs via enlargement policy to economic and financial regulation. Although the Council presidency’s mandate excludes the Foreign Affairs Configuration’s chairmanship, administrative tasks remain significant in number.

While the Council presidency has lost political leadership functions to other institutional actors, chairmanship of the Council comprises managerial aspects such as agenda-shaping or brokerage. A strong identity in the management of decision-making would, however, have a greater chance of emerging if six-month presidencies succeeded in creating a sense of shared destiny among trio members and embedded this in a more far-reaching division of labour.

The empowered European Parliament: Accommodation to the new functions provided by the Lisbon Treaty