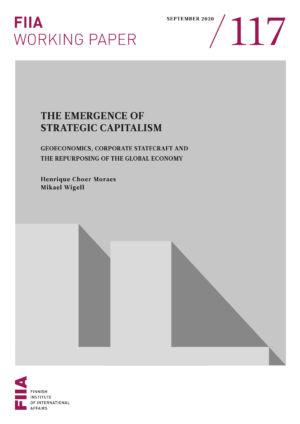 The global economy is gradually drifting in the direction of strategic capitalism. In contrast to the free market capitalism prevailing in past decades, by resorting to geoeconomic measures, governments are imposing conditions on which goods, services and technologies can be transacted and which foreign economic partners are deemed trustworthy. Companies try to preserve their businesses as far as possible while at the same time recognize they have limited control over the unfolding geoeconomic shifts. The resulting market behaviour is a nuanced attitude that could be called corporate statecraft: companies are both constraining and stimulating state geoeconomic measures. The article describes this dynamic, in which the rise of China plays a central role, and argues that the dynamic between state geoeconomic measures and corporate statecraft will define how far the global economy will depart from the current market orientation and how much it will be subject to national strategic choices.

Geopolitics versus geoeconomics: The case of Russia's geostrategy and its effects on the EU