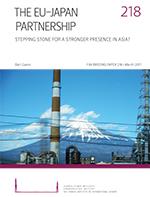 The EU increasingly aims for Free Trade Agreements (FTA) that are accompanied by a Strategic Partnership, in Asia as well as elsewhere. EU-Japan relations seem closest to resulting in a binding trade-related and political agreement.

The EU and Japan are global trade powers that focus on soft power; both share the same values, support a comprehensive approach to security, and have a history of ad hoc security cooperation. Both players are also in relative decline, and an FTA would have tremendous significance for both.

The agreement is said to be close to completion, but numerous obstacles remain, relating to market access, data protection, a human rights clause, an investment court system, and ratification in the EU. Japan’s Prime Minister Shinzo Abe visited Brussels on March 21. Both sides reaffirmed their determination to conclude an FTA “as soon as possible”.

The political agreement remains primarily of symbolic importance, and sustainable cooperation in security matters is probably a long way off. Nevertheless, in addition to economic benefits, an upgraded EU-Japan partnership through a mega-FTA coupled with a political and strategic partnership agreement would allow both players to take the lead in setting international rules and standards. For the EU, it would also form a vital stepping stone towards deepened engagement in Asia.