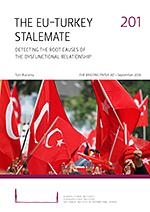 Accepting Turkey’s EU candidacy in 1999, with strong emphasis on the ‘open- ended’ nature regarding the result, was an uneasy compromise reached between those opposing and those supporting full membership among the EU members.

Through its conditionality towards Turkey, the EU has expected structural reform and democratization without wholly committing to full membership for the country.

The AKP government, which was supposed to push through the EU reforms, has used the reforms instrumentally and represents the anti-Western political Islamist movement with no European vocation.

Both parties are guilty of the ‘politics of pretending’ in the EU negotiations, resulting in a dysfunctional relationship, now crucially exposed in the context of the refugee deal and Turkey’s failed coup attempt.

The time has come for the difficult task of re-evaluating the strained Turkey-EU relationship, with three main options at hand, each having their own shortcomings: ending the negotiations altogether; continuing with the current dysfunctional model; or seriously pushing for a ‘special partnership’ in one form or another.