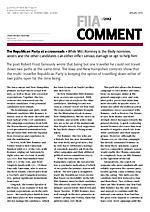 Mitt Romney’s deep and experienced state-level campaign organization, stable funding, and electability are likely to work together to give him the nomination. What the other Republican candidates can hope for are levels of exposure which would make them strong candidates for a VP nomination, a position in a potential Romney cabinet or to force Romney to accept some of their platform as his own.