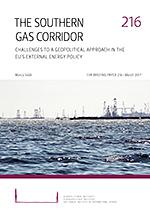 Natural gas is considered an important component of the EU energy mix, both as a replacement for more polluting fossil fuels and as a back-up for intermittent renewable energy production. However, declining domestic production has led to an increase in EU import dependency on gas.

After the Ukraine crisis, the EU has become wary of energy interdependence with Russia, its main external supplier. This led the Union to accelerate the integration of its internal gas market and to support new pipeline projects, most notably the Southern Gas Corridor (SGC).

The SGC will transport Azeri gas to South Eastern Europe, but faces numerous challenges related to its geopolitical nature. These include the lack of access to significant gas resources, security-related risks along its route and geopolitical competition from Russia and China.

The EU can reduce its exposure to external supply shocks by pursuing market integration and a more ambitious agenda focusing on renewable energy and energy efficiency, which will decrease its reliance on fossil fuels.

Inter-organisational relations as a factor shaping the EU's external identity

EU energy policy: After the failed coup in Turkey, the EU should strengthen its energy independence and cut fossil fuel purchases from authoritarian regimes