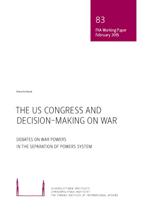 Debates on the war-making powers of the US Congress and the President have been topical of late. President Barack Obama’s actions in relation to Libya (2011), Syria (2013), and more recently the “targeted” actions against ISIL in Iraq and Syria, have raised discussions about the powers of the President as the Commander-in-Chief vis-à-vis the powers of Congress. If and when should the President seek congressional authorization for the use of US armed forces?

This Working Paper argues that Congress has constitutionally established but contingently manifest powers when it comes to decision-making on war. To examine this, the paper explicates the procedures of congressional involvement in the decision-making process on war and illustrates congressional debates on the war powers between the branches of government. The recent cases of Libya and Syria are examined in more detail to indicate the (aspired) role of Congress.

The powers between the branches of government are not static but rather (re)interpreted and (re)defined in different political contexts. War powers are one example to explicate the constitutional powers of the US Congress and the President that are divided, and to examine how these powers are considered and debated. While the debates are considered against the backdrop of the Constitution, the question to consider is how they relate to the political realities and power relations in changing political settings.

The Working Paper also explicates the role of Congress in the broader perspective rather than through the legislative record and voting only, even though the members of Congress have particularly emphasized debate (and voting) in the decision-making process. Concepts such as collective judgment, popular sovereignty and separation of powers are used in this context to indicate the role of Congress in this field. The changing nature of war and the concept of war pose new challenges for understanding and defining the powers related to “war making”, and are reflected in the continuing debates concerning the scope and relevancy of the power of Congress (and the President) when it comes to decision-making on the use of US armed forces.