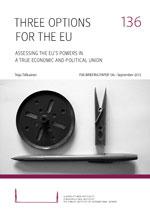 Safeguarding the EU’s unity in the long-term development of the EMU is currently one of the major challenges for the Union.

The de facto adjustments made to the EU’s economic andfiscal powers due to the economic and financial crisis, including the completion of the Banking Union, create pressures to address the treaty-based division of powers and to strengthen the democratic control of the powers executed by the Union.

The need to back the EU’s macroeconomic goals with fiscal instruments has been made evident by the economic crisis; the position of these instruments outside the common budget might become increasingly controversial.

A further increase in economic solidarity (jointly guaranteed debt, taxation power) might jeopardize the EU’s stability and democratic legitimacy if carried out in the current political and institutional framework.

A system of constitutional and fiscal federalism would produce a more stable outcome, but would require major changes in the EU’s democratic system and system of policy implementation, in its external policies and the way its constitutional powers are arranged.