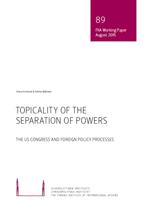 This working paper aims to consider the effect of the US Congress on American foreign policy decision-making both from the separation of powers and theoretical frameworks perspective and through practical examples. Even though the constitutional framework grants the President commander-in-chief powers, the US Congress has the power to be party to the decision-making process on committing US armed forces to hostilities. Topical discussions concerning the separation of powers and war-making have included the Libyan and Syrian crises as well as the more recent possible authorization for the use of force against ISIL.

The working paper illustrates the multidimensional role of the US Congress in US foreign policy-making, which is based on the constitutional powers of Congress and the political culture in the United States. Congress can, through direct or indirect means, exert an influence on the government’s foreign policy procedure and the President’s ability to act in certain circumstances. As a result of partisan polarization, domestic politics also have an increasing effect on the relations between Congress and the President in foreign policy-making. These relations will be mapped in more detail in the working paper by explicating the topical questions surrounding the separation of powers problematique.

The Republicans gain the upper hand: The US Congress and President Obama may find some common ground in foreign policy issues