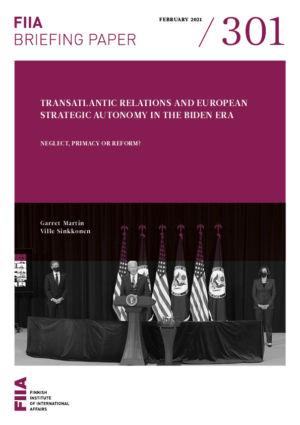 The relief in Europe following Joe Biden’s election has been tempered by uncertainty as to how the new administration might approach transatlantic relations. This paper lays out three paths that the US could take.

The benign neglect model assumes that Washington will be consumed by domestic challenges and competition with Beijing, de facto downgrading Europe as a priority.

In the primacy model, the US sees its leadership as indispensable for sustaining the international order and battling authoritarianism. The US would expect Europe to follow its lead, while old reservations about European strategic autonomy would resurface.

The major reform model would see a humbler US foreign policy, understanding that it cannot repair the fragile international liberal order alone. Supporting European strategic autonomy would be key in devising a new transatlantic division of labor.

Domestic challenges and ingrained policy habits mean that the US will likely gravitate toward neglect or primacy in its dealings with Europe. A major reform of the transatlantic relationship, while desirable, would require significant political will and investment on both sides of the Atlantic.