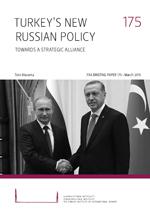 Since the end of the Cold War, Turkey has developed multi-level cooperation with Russia, characterized by increasing economic ties.

In its ideological confrontation with the West, and revisionist foreign policy stance in the Middle East, the Turkish government has been careful not to antagonize Russia in any way.

In the long run, the dominant neo-imperialist visions in both countries are likely to re-establish the traditional Russo-Turkish rivalry, but for now Russia is an important strategic ally for Turkey.

At a deeper level, Turkey’s strategic cooperation with Russia is symptomatic of the country’s own authoritarian, neo-imperialist project that has made the idea of Turkey fulfilling the EU Copenhagen political criteria completely nonsensical.

In this situation, the EU should suspend Turkey’s candidacy until there is a government in power willing to participate in a political union based on shared values.

The Transport Infrastructure in Russia - From Modernization to Development: Fact and Fiction