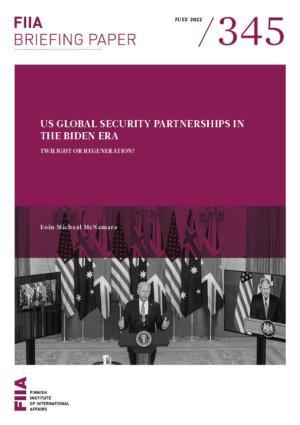 Guarantee-based alliances underpinned US grand strategy during the Cold War, but policies designed for the War on Drugs (WOD) after the 1990s, the Global War on Terror (GWOT) in the 2000s, and counter-piracy operations in the 2010s have led US policymakers to increasingly rely on ad hoc security partnerships.

Looser partnerships facilitate cooperation that is quick to reform and redistribute, benefiting the US when reacting to urgent risks. When the necessity for cooperation diminishes, partnerships allow for prompt “exit options”.

Guided by a narrowing set of strategic priorities under President Biden, the US partnership network is undergoing some downsizing. As part of a wider effort to challenge the US-led international order, Russia and China seek to reduce US opportunities to renew security partnerships.

Ever closer US and NATO partnerships with Finland and Sweden have bucked an otherwise weakening global trend in recent years. Russia’s escalated aggression in Ukraine has caused Finland and Sweden to seek policy change from partnership-based security policies to NATO membership and stronger deterrence.

The Powell Doctrine and the US-led transformation of war: Resurrection or obsolescence?