In her book titled ‘’The History and Politics of Free Movement within the European Union’’ Senior Research Fellow Saila Heinikoski introduces a new conceptual framework for analyzing practical reasoning in political discourses. This concept is applied in the analysis of national free movement debates contextualized in respective migration histories. 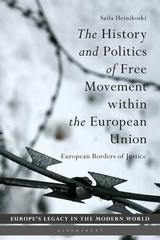 The book is published by Bloomsbury Academic and is already available as an e-book. Find more information from this link.