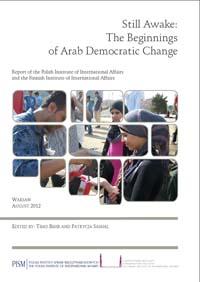 Institute Researcher Timo Behr has co-edited a report “Still Awake: The Beginnings of Arab Democratic Change” published by PISM (the Polish Institute of International Affairs) and the FIIA. The report focuses especially on the political transition taking place in Yemen, Syria, Libya, Morocco and Egypt.

As the Arab world moves from the dismantling of autocratic regimes to the creation of new systems of governance, various models of transition have emerged. Post-revolutionary political systems are likely to mirror the complex political bargains that have characterized these transition processes. This suggests that electoral politics will remain messy and that unresolved conflicts will be frozen in the emerging political orders. However, with some of these transitional bargains now being contested, there is potential for a further deepening of democratic change; but also a real risk that the region will see a re-emergence of political conflict.