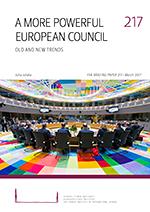 The importance of the European Council within the European Union’s political system has increased significantly due to the multiple crises that the EU has faced in recent years.

Yet its increasing role also reflects longer-term developments highlighting the importance of high-level policy coordination in the EU, and the member states’ central role in the EU decision-making.

In this context, a distinctly consensus-generating yet relatively powerful European Council presidency has emerged under Herman van Rompuy and Donald Tusk.

Shifting power relations among the EU institutions, and efforts to steer the EU legislative agenda, have raised concerns of a greater than anticipated change, however.

A degree of flexibility and adaptability concerning the role and functions of the European Council might provide efficacy, but could run counter to the objective to establish it firmly within the legal and institutional framework of the EU.