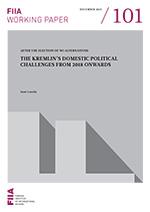 Whereas the presidential election in March 2018 hardly poses any serious challenges to Vladimir Putin, after the election the Kremlin will face at least those domestic political challenges that have become apparent during Putinʼs current presidential term. A central context for these problems can be found in the 2011–12 anti-regime protests, while the regimeʼs response to the protests largely explains Russiaʼs authoritarian development since 2012. This working paper discusses four political challenges that the Kremlin will face from 2018 onwards.

The first concerns the regimeʼs great dependency on Vladimir Putin, which has led to the deepening deterioration of formal political institutions. As a result, extremely low turnouts in elections are calling into the question the regimeʼs electoral authoritarian legitimacy.

Second, it is unclear how the Kremlinʼs ultrapatriotic course will manage to respond to the peopleʼs everyday problems amid increasing socio-economic difficulties. At the same time, the decreased patriotic euphoria after the Crimean invasion indicates that the state has not managed to build any consensus for identity politics.

The third challenge concerns the political potential of corruption for the opposition. Alexei Navalnyʼs novel anti-corruption populism has demonstrated its potential in mobilizing people throughout Russia, while the regimeʼs capacity to counter his oppositional populism by means other than coercion is seemingly limited.

Finally, growing expectations for change are apparent in popular opinion. It cannot be ruled out that oppositional anti-corruption mobilization indicates a demand for change that is also fuelling local and sectoral socio-economic protests, which have steadily multiplied throughout Russia.

Spirituality as a political instrument: The Church, the Kremlin, and the creation of the 'Russian World'

Russian foreign policy: the art of avoiding choices is in high demand