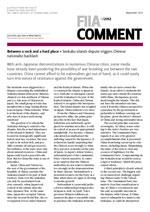 With anti-Japanese demonstrations in numerous Chinese cities, some media have already been pondering the possibility of war breaking out between the two countries. China cannot afford to let nationalism get out of hand, as it could easily turn into voices of resistance against the government.