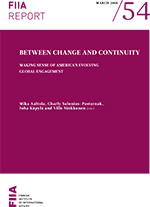 This report investigates the evolution of America’s global engagement. In particular, it examines both the longer-term trends and the more immediate dynamics that affect the global role of the United States. The report first considers domestic developments as well as strategic debates, to provide a context for understanding the potential changes and continuities in American foreign and security policy during and beyond the unfolding Trump era. The intention is to shed light on the evolution of US global engagement and national interests in terms of the future of international order, great-power relations and the strategic setting of Northern Europe. Within this global framework, the analysis also contributes to the understanding of Finland’s broad security environment.

In their first year, President Donald J. Trump and his administration have stressed competition between states, shifted US focus to hard power, emphasised the conditionality of alliance commitments, shown a preference for bilateral transactions, and paid less attention to America’s core liberal values. Nevertheless, in practice the US has been less disruptionist than initially feared. In particular, it remains committed to NATO, continues its engagement in the Asia-Pacific and Afghanistan, combats transnational terrorism and views China and Russia as strategic competitors.

Yet, the oscillation between change and continuity has alarmed America’s allies and partners. A transatlantic “waiting game” has emerged, defined by the need to pursue both strategic patience and selective sector-based proactivity.

This publication is the final report of a research project conducted by The Finnish Institute of International Affairs entitled ‘America’s changing global role and its impacts on transatlantic relations’. The project is part of the implementation of the Government Plan for Analysis, Assessment and Research for 2017. The report has been previously published in the publication series of the Government’s analysis, assessment and research activities (3/2018) on 31 January 2018.

US Trade Policy: America Resigns from its Leading Role as a Global Rule-setter