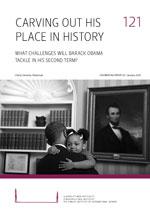 As he begins his second term, President Barack Obama’s place in history is assured. A successful second term would set him on the path to becoming one of the most highly regarded presidents in US history.

Domestic politics will continue to be Obama’s focus during his second term. He will oversee the implementation of his signature first-term accomplishments, and seek additional policy changes in how the US approaches immigration and climate change.

President Obama’s second-term foreign policy team will continue the Pivot to Asia, while refining the emerging Obama Doctrine. The use of drones, Special Forces and cyber weapons will continue, as lower-cost tools to directly address threats to US national security.

Europe must take far more responsibility for its defence and regional security, for its relationship with neighbours in the east and the south, and the EU should strive to achieve a Transatlantic Free Trade Area, while President Obama remains in office.