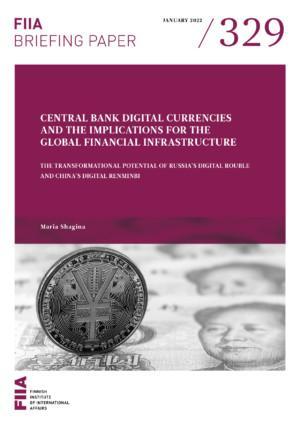 The launch of Central Bank Digital Currencies (CBDC) not only revolutionizes the international financial system, it also represents an opportunity to minimize the exposure to the US dollar transactions and avoid US oversight.

China enjoys a first-mover advantage, as it became the first major economy to launch a CBDC. Following in Beijing’s footsteps, Russia is at the forefront of advancing its digital currency project. As US-sanctioned countries, Russia’s and China’s motivation extends beyond transaction costs reduction and financial inclusion: the governments seek to reduce their dependence on the US dollar and mitigate sanctions risks.

In the short term, the US dollar’s international status remains unrivalled. No currency is well-positioned to displace the greenback as a reserve currency.

In the long term, CBDCs could eliminate the need for third-party intermediaries and allow cross-border transactions that take place outside of the US-led financial system. This would hamper the US’s ability to use sanctions as a geoeconomic tool and oversee their extraterritorial enforcement.

US-China geoeconomic rivalry intensifies: A risk or an opportunity for European companies?