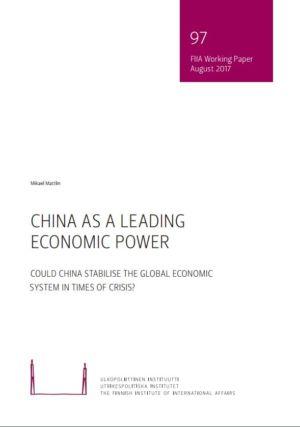 This Working Paper ponders whether China could exercise a role in global economic governance in the foreseeable future in a similar way to other leading economic powers, especially the United States and previously the United Kingdom. Specifically, the paper asks whether China is able and willing to assume responsibility for the five stabilising functions that Charles Kindleberger envisioned for a leading economic power. The paper discusses each criterion in turn, providing a tentative qualitative assessment as to whether China is prepared to assume this responsibility in light of evidence from economic data and Chinese policy debates. Particular emphasis is placed on the domestic political constraints China faces in assuming these functions. The ensuing discussion indicates that China’s importance for the global economy is more akin to that of the United States in some respects (e.g. as an import market and provider of long-term lending) than in others.

The paper concludes that the biggest stumbling block to China’s ability to fulfil the stabilising functions is its ability to act as a lender of last resort. Currently, domestic financial stability and financial system risks take precedence over China’s global economic governance role. Were a new global financial crisis to hit, China would not be able to fulfil the function of the lender of last resort for other countries. In particular, as long as China maintains tight capital controls and relatively closed financial markets, the United States will likely again be pushed to the centre of crisis management when the next crisis hits. The continuing dominance of the dollar and American financial markets in the global economic system ensures that, for the time being at least, the United States will remain the leading economic power by default.