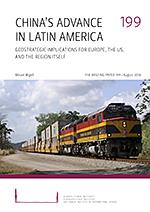 China is rapidly growing its presence in Latin America. While the Chinese activities are predominantly economic, they have long-standing strategic consequences for Europe, the US and the region itself.

China’s massive infrastructure projects help connect the different regions of South America, which may unleash stronger regional integration. At the same time, this redirects the commercial flows of South America towards the Pacific, increases Brazil’s strategic interest in its neighbouring countries, and gives the region the opportunity to pursue greater autonomy from the US and Western institutions.

Having been slow to react to China’s geoeconomics, Europe and the US not only risk being displaced economically in South America, but also risk losing important political influence. They now need to devise their own geoeconomic strategies in order to revive their engagement with the region.

Recently, the regional political situation has become more favourable for Europe and the US, with a changing of the guard towards more pro-Western political leadership. They should now seize the moment and engage with Latin America on a more equal footing by offering actual multilateralism, in contrast to China’s more bilateral approach.