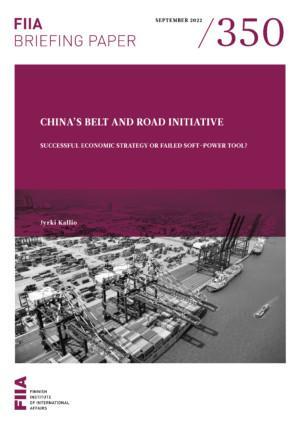 The Belt and Road Initiative (BRI) is part of China’s efforts to integrate its neighbouring countries into its economic sphere, thus increasing China’s security in its immediate neighbourhood while facing an increasingly hostile international environment due to its rivalry with the US.

In reality, the BRI has evolved into an umbrella term for various infrastructure and development projects with no unified object or strategy. The projects should, in principle, increase goodwill towards China, and correspondingly boost its influence, but in practice they are mainly aimed at economic benefit.

The results of the BRI, especially as a soft-power tool, are ambiguous. Its ideational basis is thin, consisting mainly of China’s critique towards the “hegemony of the West”. This reduces the BRI to a hollow slogan with little appeal apart from the pragmatic gains.

However, the BRI is here to stay for the duration of Xi Jinping’s rule because China’s foreign policy is often driven by prestige. The BRI is enshrined in the Communist Party’s Constitution in order to both add weight to the initiative and to increase the Party’s prestige with its success, modest as it may be.

Lessons from the proposed contours of a Russia-Ukraine peace agreement: A way for China and Taiwan to coexist?