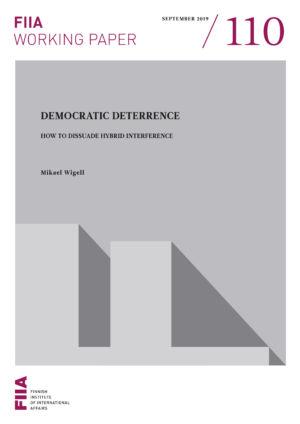 For all the rhetorical rage surrounding ‘hybrid warfare’, Western democracy is being threatened more acutely by hybrid interference. Using liberal democratic values and infrastructure for cover, authoritarian actors use a panoply of covert, non-military means to subtly drive wedges between democratic societies and undermine their internal cohesion.

This paper outlines the strategic logic of hybrid interference and shows how it puts Western democratic governability in jeopardy. It argues that deterrence policies need to be revamped in the face of this new challenge and suggests a new strategic concept – democratic deterrence – as a framework for dissuading hybrid interference. The concept of democratic deterrence shows how liberal democratic values need not be security vulnerabilities, as often presented in the current debate, but how they can be turned into strengths and tools for a credible deterrence response against hybrid aggressors, all the while making our Western democracies more robust and resilient.